Umrah Dua and Athkar according to Quran and Sunnah in which you can recite during your umrah trip. How to Perform UmrahUmrah Packages 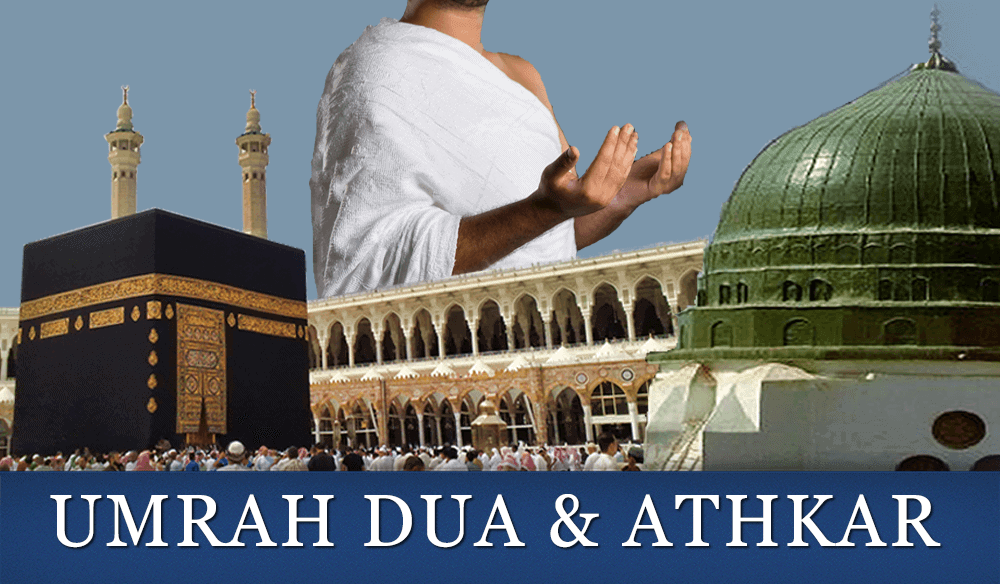 [Dua & Athkaar according to Quraan & Sunnah]

There are many dua and athkaar according to quran and sunnah which you can recite during the Umrah, and from which the Muslim can benefit by memorizing them as well, understanding them and acting upon them.

These include the following:

Part A: At the meeqaat when entering ihram:

It is Sunnah for the Muslim to recite tasbeeh, tahleel, & takbeer before entring ihram for umrah or hajj:

Anas (May Allah be pleased with him) said:

“The Prophet (PBUH) prayed duhur with four rakahs when we were with him in Madinah, and he prayed Asr in Dhul Hulayfah with two rakahs, then he stayed there overnight. When morning came he rode until he reached al-Bayda’, then he praised, glorified and magnified Allaah. Then he recited Talbiyah with the intention of performing Hajj and ‘Umrah and the people did likewise.

This ruling (which is mustahabb to recite tasbeeh & the other athkar mentioned before ihraam) is something that not many people do — even though it is proven in the Sunnah.

Part B: On the way to Makkah, between the meeqaat & the arrival in Makkah:

According to the Quran and Sunnah, it is Sunnah to recite the Talbiyah many times and to raise one’s voice especially for men, but for women should recite in a low voice so that no “non-mahram” men will hear them.

When Prophet Mohamed (PBUH) set out riding from the mosque of Dhu’l-Hulayfah, he recited the Talbiyah and said:

Every time you come in line with the Black Stone in each circuit, you say, “Allaahu akbar.”

That Prophet Mohamed (PBUH) circulated the House, and every time he came to the corner (i.e., the Black Stone), he pointed to it with something he had in his hand and said takbeer (which is “Allahu Akbar“).

Between the Yemeni Corner and the Black Stone:

You should say the words that were narrated from ‘Abd-Allaah ibn al-Saa’ib, who said:

“I heard Prophet Mohamed (PBUH) say between the two Corners:

Part D: Before climbing up Safa and when you’re at the top of it:

… then Prophet Mohamed (PBUH) went out through the gate to Safa and when he drew near to Safa he (PBUH) recited:

“Verily, Safa and Al-Marwah (two mountains in Makkah) are of the Symbols of Allah” [Baqarah 2:158] (and he said:) “I begin with that with which Allah began.”

He began with Safa and climbed it until he could see the House, then he turned to face the qiblah and proclaimed the Oneness of Allah and magnified Him, and said:

You should do the same as you did when climbing Safa, without reciting the verse before starting to climb.

Jabir (may Allah be pleased with him) said:

Then he came down towards Marwah and when his feet reached the bottom of the valley he ran until the ground started to rise, then he walked until he came to Marwah, and he did at Marwah as he had done at Safa.

When drinking Zamzam water, you may say du’aa’ asking for the best of this world and the Hereafter, because Prophet Mohamed (PBUH) said:

“The water of Zamzam is for whatever it is drunk for.”

Similarly it is prescribed to remember Allah a great deal (dhikr), which includes dua, during tawaaf and saa’i, so the Muslim should make du’aa’ as Allah inspires him.

There is nothing wrong with reciting Quran during tawaaf and saa’i. What some people say, that there are special dua’s for each circuit of tawaaf and saa’i is something for which there is no basis in sharee’ah.

“It is mustahabb during tawaaf to remember Allah and call upon Him in ways that are prescribed in sharee’ah. If one recites Quran there is nothing wrong with that.

There is no specific dhikr that has been narrated from Prophet Muhammad (PBUH), that he either enjoined, said or taught to others. Rather the pilgrim may say any dua that is prescribed in shareeah. What many people say is that there is a specific du’aa’ to be recited beneath the downspout of the Ka’bah and so on has no basis.

The Prophet (peace and blessings of Allaah be upon him) used to end his tawaaf between the two Corners by saying,

Benefited from this Article, blog, or service, please consider donating something even if it is a one dollar ($1):