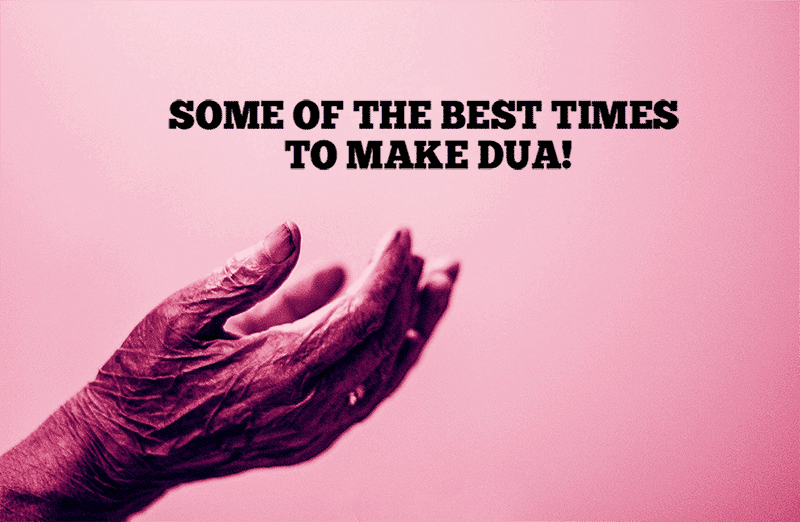 There are many times where Dua is answered, according to the Quran and Sunnah.  So it is important that the one who wants his or her Dua be answered that, he takes advantage of these times.

1. Dua in the last third of the night (the time before dawn):

Most of the creation are in deep sleep during this night, while a true worshiper is awake, earnestly praying to Allah and making Dua. In fact Allah Himself comes down to His servant, and opens for Him the doors of Mercy and Forgiveness. He comes down to meet their needs and to relieve their distress.

So if you want your dua be answered, this is one of the best time to ask. But if you’re sleeping at this time, listen what Abu Bakr Al-Tartushi said: “He is not a wise man who has a need to Allah, yet he sleeps away his need at night.” [Al-Hilali Pg. 47]

2. Dua between the Adhan and Iqamah:

This is one of the best times for the prayer to be accepted, and yet, many of us don’t take advantage of it. Five times every day, while you’re waiting to pray, make dua. Between the adhan and iqamah, you are given the opportunity to make Dua, and ask Allah whatever you want in this Dunya and Akhirah.

This is the time when the blessings of Allah descend from the Heavens. And so it is also one of the times when the dua of a worshiper is accepted.

There is a special hour on Friday, during which all prayers are accepted and answered by Allah. This is part of the blessings that Allah has blessed this day with, over all the other days of the week.

Zamzam is the name of a famous well that is in Makkah. It is the well of Ismail, son of Prophet Ibrahim (PBUH), from which Allah quenched the thrist of Ismail when he was an infant. The Prophet (PBUH) said that Zamzam “is a blessing, and it is food that satisfies.” [Muslim 4/1922].

More importantly, it was this water that two angels used to wash the Prophet’s heart (PBUH) when he was a child, after they had take it out, then they put it back. So it is sunnah to drink one’s fill of Zamzam water and to quench one’s thirst. So before drinking Zamzam, make dua.

This is the most noble posture that a worshiper can be in, for it is the epitome of humility and submissiveness. And how can it not be, when a person in prostration lowers his or her face to the dust, seeking the pleasure of Allah? This is why this posture is the most beloved by Allah.

7. Dua of the one who has been wronged:

8. There are three prayers that are not rejected

9. Dua of a righteous person for his parents:

Thank you for reading this blog. If you liked it please share the khair. Share with family and friends.

Help us Maintain the House of Allah.

If everyone visiting our site made $10/month donation or one time $60 donation, then we will not ask for a donation this year 2017.